Woah ho peeps. On official day 3 of our Hobart adventure, and at the end of a long day travelling to Port Arthur and being absolutely wowed by the scenery, well, we were still yet to be wowed by a dinner option.

It was an ongoing, intense search to find a restaurant that had red meat for Hubbie… kid-friendly food for baby girl… and then I wanted to be happy too you know… and yet finding a happy medium for all seemed almost impossible.

Not with a fussy butcher and 5 year-old child.

We needed pasta, or carbs for her. Meat for him. It had to be mid-range. Not a party place, not the poshiest restaurant, but we didn’t want to be led down the back of an alleyway either.

The options that we found fit the bill were unfortunately closed. Some for renovations, some just for that night.

So when I came across the online menu for this one I had to have a second look. It appeared ok. We had to check it out.

We went to Salamanca Place, again, and discovered the menu was deceiving…

Oh, how the menu was deceiving…

Because it was so much better!

The current Ball and Chain Grill building was built in the 1800s by convicts, and what started out as offices dealing with the stock of wool, whale oil and food, has grown over time into the traditional dining establishment we have today.

The online menu explained to me the extensive dinner options, which is why I was so confused on arrival. Sure there were the appetisers, entrée and mains, the grilled section and also the kids meals. But then as we arrived, walking past the traditional wood panelled rooms, the open-view grilling section at the front, and were seated in this multi-layered, multi-roomed establishment which was filled to the brim with people, we saw, a kind of salad bar in the middle of the venue.

Curious, yet not sure what to think, we followed our waitress to our seats, and lucky for us she had since spied our out-of-town status a mile away and proceeded to explain to us their concept.

Which is when we had our “ahhhh!” moment.

We could order as we liked from the menu, but the salad bar was their free, all-you-can-eat addition… you could go and choose from a variety of salads and vegetable-type side dishes, with sauces to choose from too, take as many away as you liked, and that was FREE.

Considering he is a butcher, this excited my green-leafed guy immensely. He could fill up on as many greens as he could muster, and then spend his hard-earned cash on the things that pleased him most:

After getting a spot of drinks, a local red for me and a Moo Brew beer for him…

We ordered with our friendly waitress, and then proceeded to take turns at the ‘salad bar.’

Just to clarify, these were cold salads. We got things like lettuce, cucumber, noodles and chickpea salads alongside beetroot…

(Many apologies for the crap photos, dim lighting was my enemy)

And then our meals came. Kids meals are $15 and the pasta option was pasta bolognaise, but our girl being anti-sauce at the time, we were able to get her plain pasta with cheese: 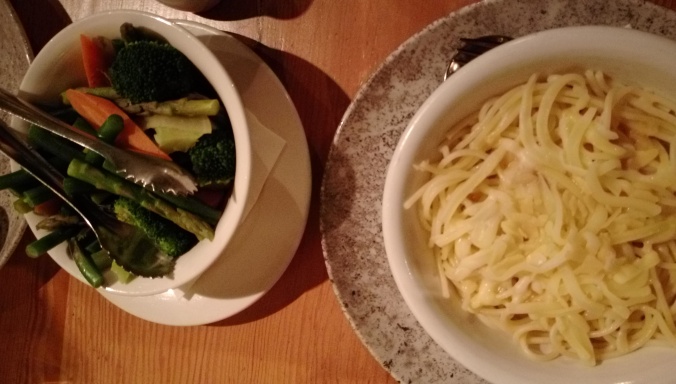 And there were also seasonal vegies alongside that to share (in baby girl’s pasta photo).

I’m going to work backwards here. I say ‘potatoes,’ but as you can see there is only two potatoes. I know. I guess they figure that you get your sides from all the other free food on offer. Ok I can look past that, and my also smallish serving due to that fact. I didn’t walk away hungry.

Hubbie thought his medium steak was good, but slightly undercooked given it was meant to be ‘medium’… and having said that, my steak too was slightly undercooked for what I genuinely preferred. Although our waitress was lovely, she had suggested we get our steaks cooked to a ‘medium,’ rather than ‘medium to well’ as we wanted, so it was a case of we should have just gone with our inner-most thoughts… after all we know US best, right?

I thought baby girl’s pasta presentation was pretty average, you may probably disagree and say what else can you do with plain pasta and cheese, and I will say, LOTS! I am the plain pasta expert here! But alas, she still ate most of it so I won’t complain much.

The wine was great, the beer was satisfying to Hubbie, and once we had eaten all our meals and sides and taken in the Saturday night Hobart surrounds, we figured it was time we headed off to rest before another sightseeing day.

Ambience: Bustling and busy, happening and loud, though there were intimate places about, so you could be private if you wanted to be… it was a Saturday night though.

Staff: Our waitress was wonderful and warm, and tended to our every question.

People: Family-friendly, older groups, couples, friends, you find them all here, though I do think the focus is the settled family crowd.

Price: $106, which is mid-range, considering we had all those salads we didn’t have to pay for. Our steaks brought the price up too.

Advice: If you are hungry, your friend will be that salad bar. 😍 Save yourself, then eat it all later.

In a nutshell: It’s a traditional type of restaurant and one I would go to again when in Salamanca Place… there is great variety, plenty of room, and an old-school, vintage feel that is hard to create or emulate elsewhere, as it comes with the experience and history of the town and the buildings within.

And just like the restaurant, I have to say, many things nowadays aren’t created to the high standards that they once were. Head on down to check out the expertly crafted building and subsequent food, of equal stature.

#2366 Progression of a perfect sky