Well personally… I was in year 10, and listening to and doing “Livin la vida Loca” to Ricky Martin.

I watched 10 Things I Hate About You, and it became EVERYTHING. Heath Ledger God rest his soul, and that song routine on the school bleachers? Heaven.

Only one of my most FAVOURITEST SHOWS OF ALL TIME debuted… Angel. Ahhh. 🙂

I dabbled with more blonde in my hair.

Worldwide, everyone was freaking out about the whole year 2000 and subsequent Y2K bug, and if that wasn’t going to end us, apparently at the end of the year, or sometime during the year 2000… the whole world as we knew it would go kaput. You know, the usual Nostradamus prediction stuff and all.

But in other parts… well the eatery off Main street Mornington, either its brainchild flourished in that era… or they just like the graffiti from the Banksy of Naples… OR they’re really into football.

The place I’m talking about is of course Bronx Napoli 1999.

To work out which of the above explanations it could be, click through to their website here.

But very randomly, one Tuesday night in May, we found ourselves without power… but it wasn’t the Y2K bug at work. The failure of power wasn’t that surprising, since we had been given advance notice that electrical works to the area may result in no electricity, from 8 in the morning to oh… 3pm?

But at 4:30 when I got home from the library with baby girl and there was still nothing… I knew the candles would have to come out.

A short walk over to the road work men, and Hubbie found out sometime around 6pm, that they had experienced difficulties, and the work had been delayed… they hoped it would all be working in an hour or two.

No electricity? Why it was dinner time! With no working power in the house, even if we got takeaway, candles were not sufficient enough to light up the table, rooms, the house?

So naturally, we had to go out… and eat.

I don’t know why we went here, but we did. We were just so happy to go into a warm and well-lit place that honestly, any place would have been sufficient.

It is a wide, high-ceilinged restaurant. An open kitchen allowed us to see through into where the chefs were preparing our meals, and in front of the open counter was a selection of their own home-made pastas to take home… ooooh!

Soon enough we ordered drinks… A Mornington Pale Ale for Hubbie, and a Stumpy Gully Pinot Noir from the Mornington Peninsula for moi: 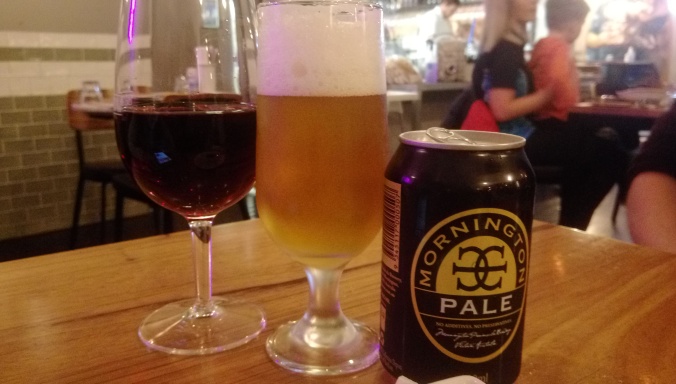 What I loved was the accompaniment of warm bread with olive oil and balsamic reduction…. Drool. This I loved. It was on the house (well, you know, as much as ‘on the house’ means work is paying for your meal, not you 😉 ) 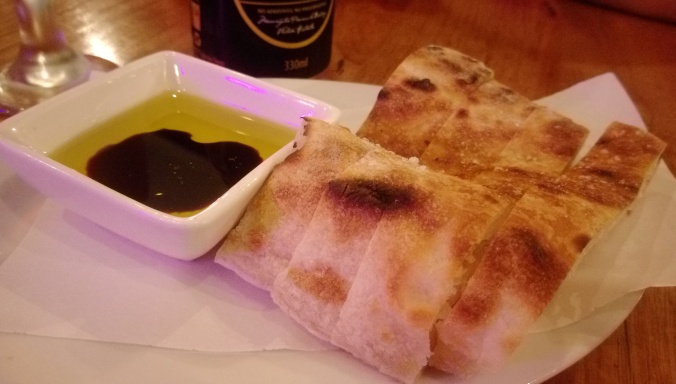 Baby girl was a fan of this one too.

We sat in the dim light of the restaurant just taking in our surroundings. It was warm. There was light. Ahhh. Electricity. There were plenty of families about, and we tuned into the conversation about European travel from the 45+ double date couples beside us.

Soon though, our food arrived. 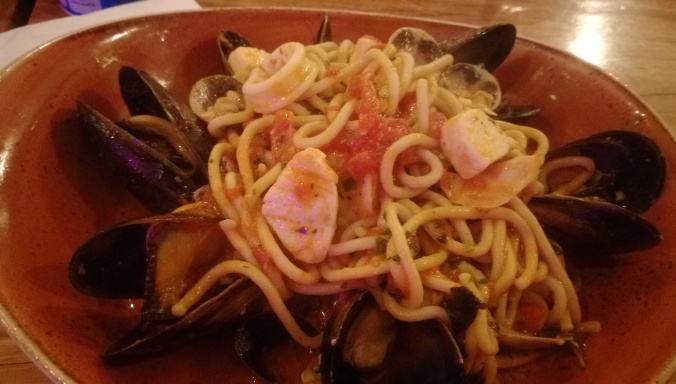 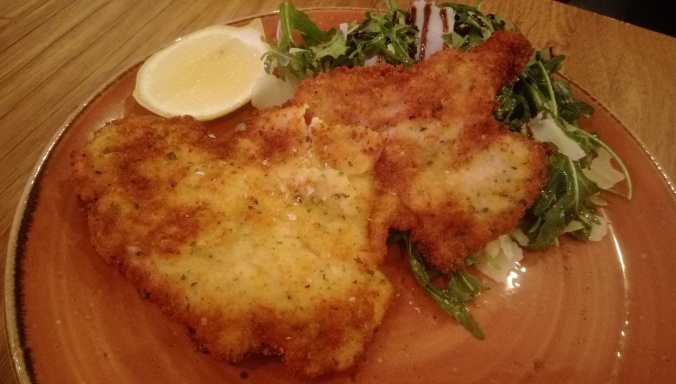 Baby girl had the Bambini only pasta for kids, which was ‘pasta of the day with parmesan (and olive oil on the side).’ 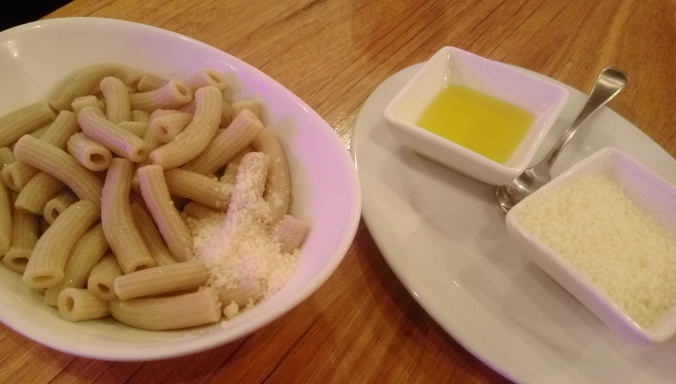 And as an addition we also got a side of Patate fritte – thick cut potatoes, served with garlic aioli. 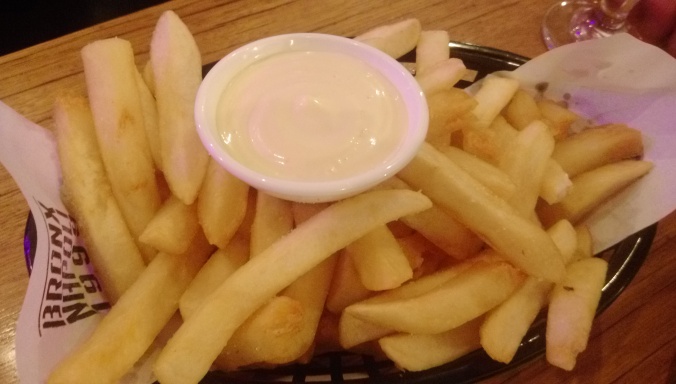 So firstly, my spaghetti. I enjoyed my meal as it had a mild seafood flavour, strong enough to be yum, not so much to be overpowering like other restaurants (ahem, Manhattan?) The seafood was cooked well too, and that is always a plus seeing as biting into some longed-for prawns goes a bit awry when rubbery. But this was great.

Baby girl in fact did not have the Napoli sauce as mentioned in the bambini menu, she had cheese and oil on the side of her plain pasta. The waitress went to great lengths to ensure she got her order right, and even when it was delivered she was particularly interested to see if she was happy about it.

Someone interested in my 4 year-old being happy? May sound absurdly odd to think this as being so foreign, but alas no one gives a shit about kids. So I was happy, that she wanted to make baby girl happy.

And, baby girl was happy 🙂

But now, to the fussy butcher.

His exact thoughts, (and I recoil writing these words), were that the pork was turning. If you are not eloquent in Butcher speak, or aren’t married to one fine specimen, or don’t watch a lot of cooking shows, basically what he meant was that it was old. Old old old. He could taste it in every bite, and though he still ate it, because he was hungry, he was not impressed.

Don’t ask me how he knows…. He just knows.

On the positive, his rocket, parmesan and balsamic dressing was amazing. Anytime anyone gives me that combo, I am SOLD! Alas it was not enough to save his meal, but I was happy, picking at bits here and there.

And the patate fritte? Well, chips. Chips are chips. But these were super hot and actually quite yum. And the garlic aioli made it especially moorish.

We soon finished our meals, our bellies fuller, our bodies warmer, and hoping to go home and find our house, a little bit lighter…

Food: 7/10. I find it hard to score and average out when components of the meal are great, others not so. Because majority meals won, 7 it is. Baby girl was tended to with care, and the chips and my spaghetti were delicious.

Coffee: N/A on this visit.

Ambience: Dimly lit, yet with that chatterbox restaurant air. Cosy despite those high ceilings.

People: A lot of families of all ages. Young, old, double daters, and a group of pensioners arrived as we were leaving, enthralled with our girl in Queen Elsa costume.

Staff: Our waitress was very serious, but worked hard to please us. Extra points for her care towards baby girl.

Price: $96.50. That was 2 adult meals, one child’s meal, one side, and two alcoholic drinks… Hmmm it sounds about right, but had Hubbie’s been up to scratch, I would have been happier with that amount.

Advice: I think going the pizza or pasta route at this place is the way to go. It is abundant in their menu, and the way our pastas were brought out, the care is evident there. There is also a share menu for groups of 4 or more, and so having them select the best plates for you and your group to share, would also be worth doing if in company.

In a nutshell: I liked the place… Hubbie was not so impressed. But then again, this is me and my adventure with a fussy butcher Hubbie, and so that has become quite the norm. He swore off restaurants after this visit, but it was no fault of Bronx’s alone… it was the build-up of unsatisfactory meat meals at both Manhattan and Kirks, prior to that visit, from restaurants we both loved.

So the disappointment was wide-spread and handled out equally. ;/

But you can be assured we went out to eat again within a fortnight. So he is not an elephant. He can forget. Kind of.

I for one would like to go back with a group and try the share menu. And how could I not want to, when the wishes and whims of my little Queen were catered to so wonderfully?

Even, when in the Bronx.

In a waiting room in Mornington.

Two elderly people are passing me, a male and a female. They are 80+, at least, and the woman is either his Mother, or his very aged wife. Let’s assume the latter when we go back to the snippet I heard:

Woman: “He said you did very well.” (leaning over closer) “He said your heart is strong.”

Woman: “Of course it is Peter or you’d be dead by now!”

For sure wife. Such a wife thing to say.

You know, I thought that when you were old, death might be a topic you generally don’t wanna think or talk too much about. But this couple, oh geez… after my heart. ♥

And Peter’s is strong, don’t forget.

I hear some pretty interesting things when I’m out and about, and I don’t even try to eavesdrop in on other people’s stuff. Sometimes they are just so vocally forthcoming in letting the world know what is happening in their lives, you just can’t help but hear their conversations. I doubt I’m the only one privy to this phenomenon…

So today, in the first of this series, on a beautiful morning walk back to work with amazing coffee in hand, I hear:

“She wanted to fuck me/him so bad…”

Geez dude. I should have slowed down and listened to the juicy Jersey Shore-type convo between two smart-dressed young guys a little more…