Our winery exploration continued. We had a free Sunday in October, and though a bit dreary at first, it was also a mild day.

We would wine and dine then.

I had heard about some kids activities, such as duck feeding and trampoline jumping on these Main Ridge fields, and when I saw I had a token for free duck food, it make up my mind EVEN more.

Ok, so really? We all know I didn’t need the duck food token to get ourselves quacking on over.

It was the promise of this: 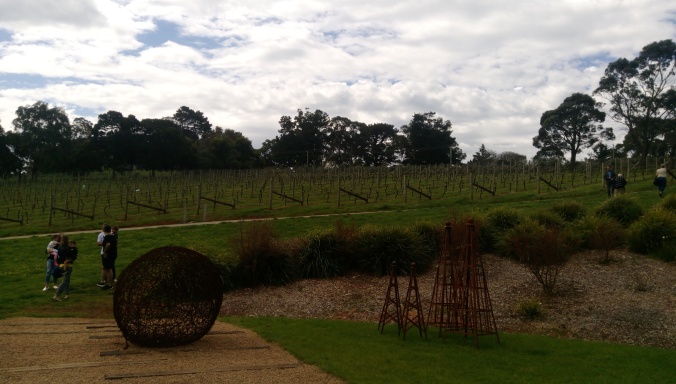 Once we had driven some distance through endless tree views, and then parked and walked down a long and sloping uneven gravel surface to the restaurant below us, only then did we get a chance to sample some of the above. 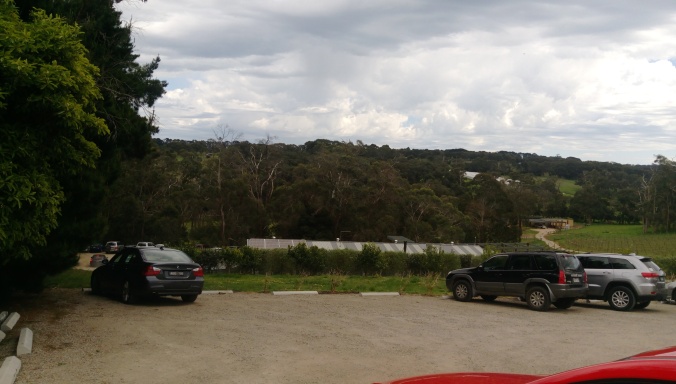 It was a busy day. We were amazed just how so, and managed to quickly nab ourselves a table outside where it was free for the picking. The inside tables were all full and reserved, and there were quite a few of them too. We grabbed one just outside of the main doors, and proceeded to try and open up the umbrella as precarious drops from the darkening heavens floated on down.

It never rained though, and so we were able to relax.

The store is inside as you line up to order, featuring all of the farm-made produce such as their dukkah, olives, oil, and other fine deli produce. Positioning is fantastic especially on a day like that was, as you had a lot of time to fall in love with the various olive bowls, gourmet pastas and even body creams up for sale as you waited in line.

Fantastic strategy for them. Not a good thing FOR ME.

But I controlled myself, and focused on the outcome ahead of me. Order the food. It took a good while, but finally I was at the counter and baby girl and I were ordering our drinks and food. 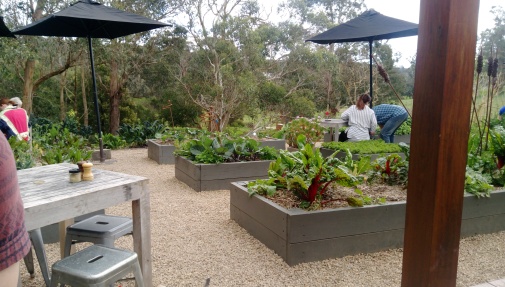 Which brings us back to the above image. Now as Robert Zemeckis would be proud to hear me say, Back to the Future.

I got some drawing paper and pencils from a ’help yourself’ area inside the café, and then as baby girl got drawing, we observed the quirky garden elements/accessories around us as we waited for our drinks, which took a bit as they were so busy… A 2017 Moscato for me, and a Mornington Peninsula Pale Ale for Hubbie:

It was fabulous. A sorta sunny Sun-day, out with the fam, enjoying the increasing Melbourne warmth, wine… why, it was divine.

The setting was fabulous, but how would the food fare?

The food is tapas style, but we weren’t overly hungry so we were content to get a piece for each of us and share as we pleased. It was hard to find something for baby girl, so we ended up getting some bread and dip, used the dip ourselves and let her dig into the bread. Ahhh, good ol’ carbs.

and alongside that was Hubbie’s selection of a BBQ Pulled Pork open sandwich, pickled carrot, chilli salt 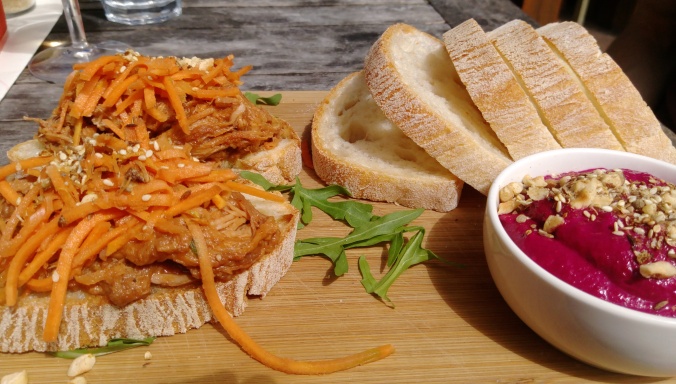 And then my choice was Egg frittata filled with garden vegetables, farm made capsicum relish

They were tapas, and they were presented nicely, but for what we got, we felt $12.95 each was a tad steep. The group of rich older Italians behind us (don’t ask how we know, we just do) also agreed. The older man who reminded Hubbie of his old boss, was saying loudly how they had just spent $200 on tapas between the group of them and were still hungry (see that’s how we know, typical Italians).

Although the food was ok, not amazing but still good, we were still infuriated by the antics of another fellow European on a nearby table. Don’t ask me how I know, I just know. She was with her husband and child, and she was wearing white pants.

Also we could hear a slight accent.

She was really horrible. She had a gripe about something, and I do not lie, but she complained and had two different waitresses come over to listen to her whinge on at least 5 separate occasions. She would not let up. It was upsetting to witness for the poor waitresses, and she looked a total mole so I was in total support for the staff. We were trying to eavesdrop as all good people do, thinking she clearly wore the (white) pants in the relationship, when her husband even started up! OMG just go away. Their problem was food-related, and though I wasn’t exactly dancing myself in the seat from the taste sensations in my mouth, I also wasn’t a horrible person to blame the waitress for thinking my meal should be otherwise. There is a way to distribute criticism, and white pants lady, her way was just SHIT.

Hubbie and I were so peeved at their unrelenting and non-stop negativity that WE almost told them to leave. It affected our mood, but we got coffee and dessert and tried to put her white pants and snarky voice behind us. 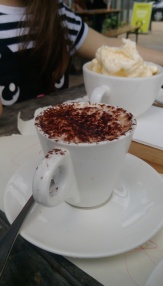 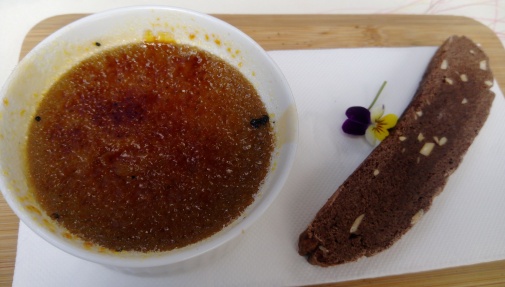 The cappuccinos were satisfactory as was the babycino (established by how quickly she smashed it down), and the ice cream also so. We held the sauce on the ice cream for baby girl, and I had the coffee crème brulee with biscotti on the side which most definitely had the caffeine kick, whereas Hubbie had a counter brownie – not anything amazing he said.

After that was done we soon claimed our duck food with voucher (detouring off to the in-ground trampoline below the café that baby girl went psycho on for 5 minutes) before we headed down to the lake. 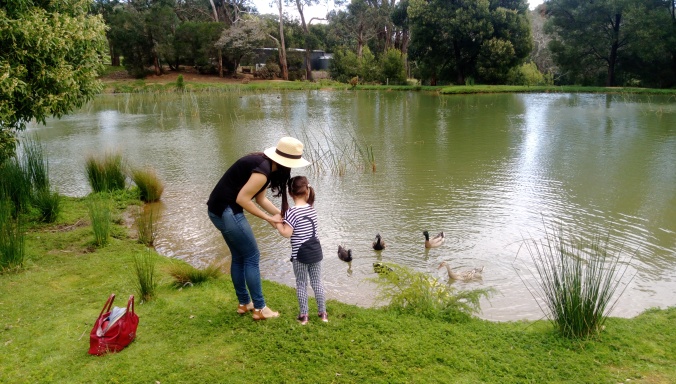 It had been a mixed duck-bag of experiences. The setting was amazing and worth the visit. We weren’t sure about the food, and were wondering if we had ordered something else, whether that would have been more to our liking.

These thoughts were on our minds as we headed back home…

Food: 7/10. It was ok, but compared to the scenery before us, it was slightly underwhelming.

Ambience: It was a very relaxed yet refined vibe. Very refined. You were amongst the vineyard and trees and all-round greenery, and yet this greenery had $ attached. See below.

People: We were in Main Ridge, and the people representing showed us we were not in Kansas (or Mornington) anymore with their super designer threads and fancy-schmanc handbags.

Price: I wasn’t keeping receipts each time we ordered, and the girl behind the counter wasn’t offering either – a clever tactic perhaps to keep you from keeping score, or just busy? – but I kept score, and it tallied to about $95. A bit much for tapas, even with alcohol included. That price should have given us larger meals.

Advice: 1) Sit outside on a sunny day, 2) if going on the weekend with a larger group perhaps best to book ahead, and 3) just keep in mind that you might need to order multiple tapas to fulfill your hunger. The accompaniment of wines will make you need MORE.

In a nutshell: It is a lovely place to while the day away on a sunny day, whether with family or friends, or let’s face it even by yourself as all busy Mums will attest. And it is super kid-friendly in the ‘activities’ department, what with the drawing accessories, trampoline and duck feeding on offer, as well as all the walks you can take exploring the grounds which we didn’t end up doing.

The food store itself gives me reason to go back, but food wise, I’ll probably check out all the other Hills on the Peninsula, Red or otherwise, before going back to taste-test their other menu options…

Precisely 2:02pm, on Wednesday the 7th of November.

Sighted: A petite woman in a superbly fitted blue suit. Skinny and tall.

She is carrying a purse in one hand, a folder of documents under her arm, and in her other hand…

She is walking carefully, watching where her awfully narrow heels will fall.

Avoid that dirt surrounding the random plants, girlfriend. Avoid those lines in the footpath.

But this, is a woman on a mission.

This woman will not give up.

This woman will do anything to get her coffee, and keep her colleagues amicable at the same time…

This, is a dangerous and powerful woman.

Watch out world. This is my kind of woman 😉 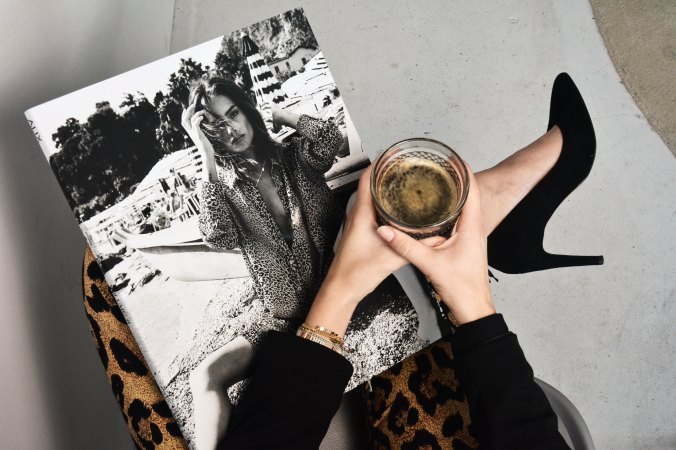 Photo by Cleo Vermij at Unsplash