It’s been several months now since our tropical getaway, and yet the memories of that trip have not ceased to stand out in the forefront of our minds. Port Douglas was a place I had always longed to go to, and now that I have, I can share it with all of YOU, all the amazing and unforgettable (and difficult) aspects. This information is for all local, national and international visitors alike, as the varied accent in those Northern parts was not uncommon, let me tell you! We travelled with baby girl, 2 years old at the time, so I can also give some advice as to how to go about your days with a toddler… it ain’t easy, but it sure was fun! 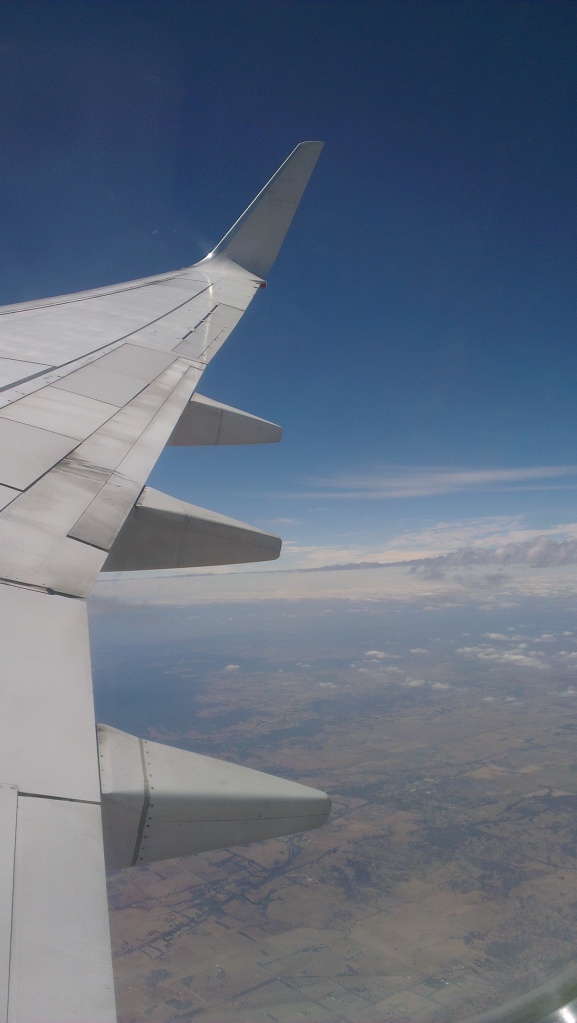 We flew from Melbourne to Cairns, meant to be just over a 3 hour trip, though on that occasion the flight was slightly less. We had organised car hire from Cairns, so that we could do the drive up on our terms. There are shared transfer options up to Port Douglas (an hour by car if there are no stops) but having done that for our Noosa trip years ago, we knew that there was the possibility of the van stopping as it picked up other passengers, and we didn’t want to risk upsetting baby girl with the potential delay that could cause. Plus, being in a car of our own, meant we could stop if we absolutely had to, and as it was, she fell asleep for some of the way which was great.

I had read that the drive from Cairns to Port Douglas was a scenic one, and sure enough, that promise delivered. Serene bayside views, picturesque backdrops, driving through quaint beachside villages, people wearing not much but thongs and singlets, and trees trees trees. It was very wind-y. As in winding around and around and around (and around!) the hills to get there.

About 20 minutes away from our destination we got an onslaught of rain. Only this wasn’t just an onslaught, this was a tropical storm of mammoth proportions. We had heard of the tropical rain at that time of year, and wondered if that would be the norm for the rest of our trip. Luckily, no. We got a bit more rain while there, but very minimal, and nothing like what we had driven through. So if driving up at the start of the year, be careful.

Having a car allowed us the luxury of being able to go about wherever we wanted, without having to rely on public transport and the often inconveniences of waiting for it with a toddler. Even though we were situated in the middle of Macrossan Street, we still ended up using the car a fair bit. Consider it if you are with children. We had a child seat added for baby girl, and just make sure there are no km limits with the car you hire, since you would be travelling an hour to and from Port Douglas to Cairns (not including additional travel around the area) it does add up. (And remember to return the car with fuel!)

We stayed at Saltwater Luxury Apartments, situated right in the middle of Macrossan Street. We had parking underneath the premises, and there is a shared pool for holiday stayers to use, which we did, twice. It wasn’t an Olympic-sized pool, but it was enough. Baby girl squealed with delight and tried to break in every day, so = Pass.

We had a two-bedroom apartment overlooking the main street, which meant at night things got noisy! Our room was closer to the street, with baby girl’s closer to the entrance door which was nearer the other apartments and the shared corridor between them. On several occasions, people coming home would think it acceptable to talk loudly with one another in the corridor before walking into their apartment, despite all the other nearby stayers! On night 1 we discovered ‘the birds,’ loud riotous birds that sang almost all night, there must have been at least 50 of them, and they sounded like they were outside our room. “Don’t birds sleep?” Hubbie and I asked each other at 1am. Along with this there was the noise that eventually waned off from the below restaurant, Bel Cibo, with the kitchen staff cleaning and washing up and making all kinds of racket until they left the premises about midnight.

So, it was a noisy place to stay. I was slightly nervous because I was worried baby girl would wake up from the noise. And she did wake up, but not from the noise… she was just unsure of her surroundings when she opened her eyes in the middle of the night.

It is a fantastic place, if you want to be in the heart of it all, and be able to walk to everything. In fact, you could base your holiday around Macrossan Street, and just go everywhere on foot, especially if you have no kiddies… but then you would miss out on Mossman Gorge. Oh man you don’t want to miss out on that one.

So, great location, but noisy at night. Parents may find it a bit annoying with the constant racket, but then again, it was high season, at the start of January. The 2 bedroom apartment was like a little house, with bathrooms adjoining both rooms, a kitchen aside a kitchen table and then the lounge room, and there was an outside enclosed area that you could sit and view the diners at Bel Cibo and people walking on Macrossan Street below. They are like little houses because you can hire them out for long stays. Definitely a great idea, especially when we go back again with our extended family 🙂

If you are going to Port Douglas, be mindful of this: you will be hot. Not like ‘oooh, I think I might change into shorts’ hot, I’m talking humidity seeping into every crevice of your body, overcoming and suffocating you, sweat trickling down the bridge of your nose, give-me-that-pitcher-of-water-so-I-can-throw-it-over-my-head, type hot. Baby girl found it uncomfortable, as she seemed cranky on many an occasion, except for when she was in the water. Then it was bliss for her (and us). I didn’t pack anything long-sleeved or long-panted; it was light and airy all the way. I did pack insect repellent for the rainforests, but I never used it, and we never needed it either. Sunscreen is a must too.

I mean, there’s a reason why all the restaurants have fans.

We ate at many great places while in Port Douglas. I’ll list them by my personal lowest to highest ranking, and note that you can click on each name which links to my actual food review post on the restaurant in question, for a more in-depth analysis of our dining experience there:

Rattle ‘n’ Hum – casual dining where you order your food at the counter.

Whileaway Bookstore and Café – great mishmash of literature and lattes. Coffee was ok, books and surroundings were heaven.

Little Larder – These guys kind of tie with Watergate below. Funky vibe, the place to go, great coffee, food, and service. Gold.

Watergate – Fine dining, but add exclusivity. Fire, fans and all you need is Gorillas (see my review for an explanation!) Amazing food, I will be going back for the coffee and dessert! Loved.

A notable mention goes to Mocka’s Pies which we had one day for lunch. We had coffee and cake there on Day 2 – 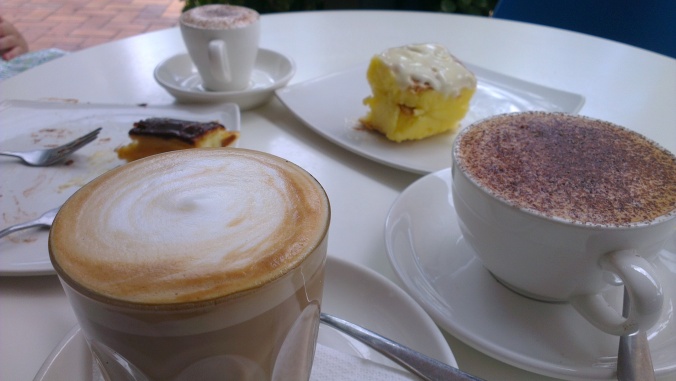 and then later Hubbie got some takeaway pies. Their pies are meant to be some of the best going around, and from the few we tried back at Saltwater, we could tell it was true. We shared a Steak pie (the one with the X) 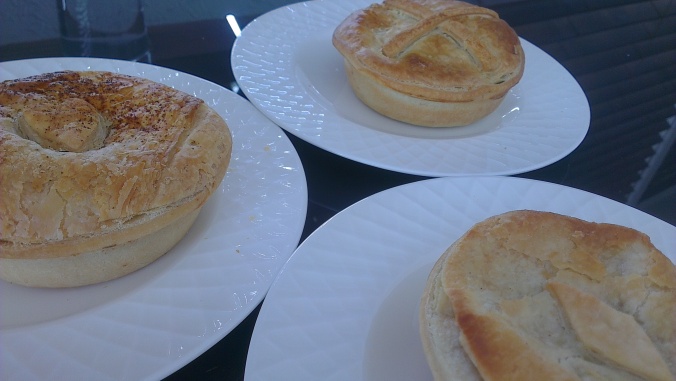 And a corn and asparagus pie

The latter pie was perhaps a questionable one, only because it wasn’t to our taste, but the first two were really delicious. I’m not a traditional pie fan, so I love it when I find pies with fillings that aren’t filled with offcuts and random bits and pieces just to fill it in. We were really happy with this find.

I don’t have the names of the other places we got takeaway food at, but one place we grabbed toasted sandwiches and steak sandwiches from was just up from Mocka’s Pies in Grant Street, but closer to the Macrossan Street end. They were ok, just as our fried rice and noodles was ok nights later from a restaurant somewhere around there too! There are so many options in that part of Port Douglas, you can afford to be fussy.

There was also a nearby Safeway, and a couple of liquor shops if you’re taking away to eat/drink at home. If you’re staying in this part of Port Douglas, it’s easy to buy anything you need and just walk on back to your accommodation to enjoy in your own private space. Super convenient surrounds.

Stay tuned for Part 2 of my Port Douglas 4 night guide where I discuss the amazing! and so-so Attractions we came across… coming very soon.