Since this restaurant had been booked out on night one of our Port Douglas getaway, Hubbie had booked us a table the following day for that Sunday night. It was not only conveniently placed near our accommodation, but it had elevated views of Macrossan street with a distinctly poshy vibe. We had been walking by the restaurant for two days now, looking into the kitchen and watching the all-white uniformed chefs do their thing. Soon they would be cooking for us.

On our arrival to Bel Cibo that night we were promptly seated and menus were brought to us immediately. And so it continued: the service was always there, with wait staff constantly checking in on us, whether it was to top up our drinks, get our food, or see if everything was ok. This was great, and the only reason I was peeved was that it made it a tad difficult for me to discreetly take photos. Not a bad thing to say: ‘we were waited on too much!’

Once again fans were in abundance overhead, however tonight this was in stark comparison to that of Rattle ‘n’ Hum the night before. With the overhead views of Macrossan Street, the sounds of International accents coming from both customers and wait staff all around, and the paper-covered linen tables that immediately characterised what kind of restaurant it was, I knew this was going to be a fine-dining experience. Add to that the humidity, and the increasing bird calls coming from one particular end of the main street from an enormous tree, and it felt like we were on an exclusive jungle safari somewhere in Africa. 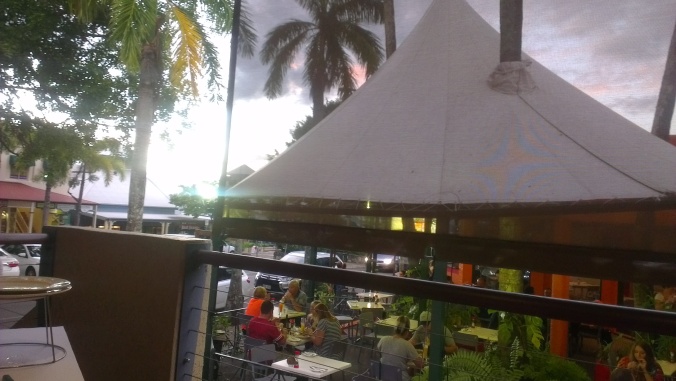 Baby girl was brought pencils straight away which she doodled with on the paper tablecloth, keeping her slightly occupied. 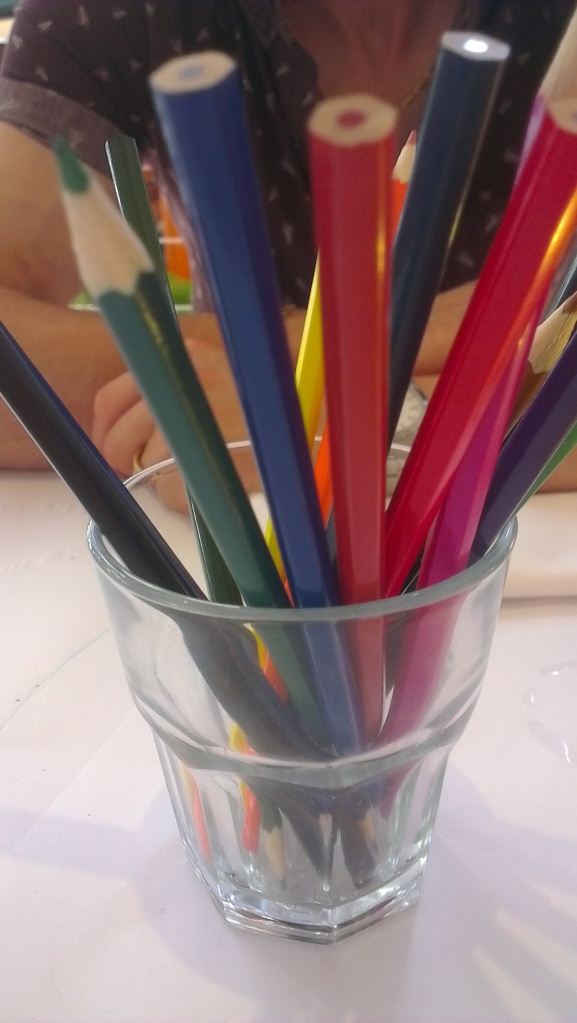 Since we had arrived pre-7pm, our meals came quite quickly after that.

Our drinks of French Martini and a Crown 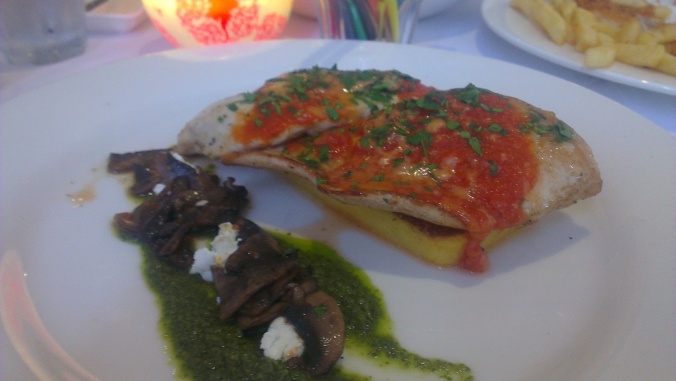 To share, some Broccolini with garlic /lemon / evo oil / pistachio 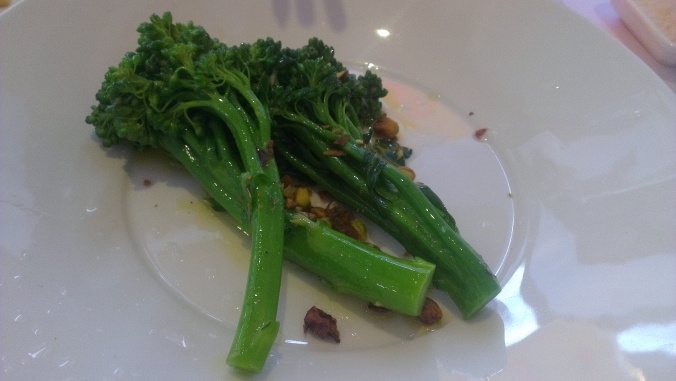 I really loved my meal. The prawns were cooked beautifully, with the light lemon-y sauce surrounding it complimenting it well. The addition of potatoes and broccolini were definitely needed for this carb-loving girl, and even though I was content on completion of my meal, it was still one of those meals at those posh places, where the quality of the food is high and tasty, yet the quantity of what you get on your plate is not in abundance. Nevertheless I really enjoyed my (approximately 5) prawns, they had a bit of a seafood taste too which Hubbie didn’t like, but all the better I thought, more for me 😉 They were very flavoursome and I enjoyed every bite, wishing there was more. The presentation was also of a high calibre.

Hubbie thought his meal components were perfectly matched and on the ball – chicken, polenta, mushrooms and salsa. He loved his meal too and enjoyed every bite.

We were however a bit undecided as to what to think about his chicken, and in particular baby girl’s chicken strips. It was brown and stringy, not white the way chicken usually looks. Hubbie first thought they had given her a cheaper cut of chicken from an ‘unfavoured’ side of the chicken – this pissed us off because hey, just because she’s a child and she has a cheaper meal doesn’t mean she should get a cheaper cut… then he considered the fact that perhaps it was in fact organic, unbleached chicken, since most chickens are apparently bleached white to get their pristine colour. After telling me that, I was so glad I was eating prawns. The fact that his chicken too was also on the brown side, told us that perhaps all their chicken was like that. But if it were organic, surely it couldn’t be stringy too? When I tried hers, I realised why she wasn’t keen on eating it at all. It was only that confusing factor that left us wondering why everything bar the chicken was of such high quality.

The broccolini was a nice side addition, and the combination of garlic, lemon and pistachios made it quite tasty and moorish.

As soon as we had eaten it was time to go: baby girl was keen to run around, and it was now ice cream time (there was definitely room in our stomachs for that).

Food: 8/10. Even with the undecided chicken verdict. Those prawns were the best I had in Port Douglas.

Ambience: A refined dining experience, and although there were many families around, these were the families with grown-up kids who had plenty of $$$ to splash. This was on the quieter, rather than rambunctious side.

People: As above, ‘developed’ families, couples, and there was at least one another family with a baby, I remember it well because the baby looked 2 days old and the woman’s partner just walked into the restaurant leaving her to carry 2 day-old baby in one arm and lug a pram up the stairs on her own with the other. Other than the latter, most people seemed a bit head-up-their-ass unable to smile, so just be aware that the people that usually smile at you, will be looking at your child instead with a ‘duh’ expression, their kids’ faces speaking boredom with ‘I hate this family holiday.’

Staff: They were friendly, very professional, and attentive.

Price: $119.50 for the lot, which makes perfect sense for our dinner of 3 alcoholic drinks, (did I mention my French Martini was YUM!) 2 mains, a kids meal and a side, at that type of restaurant.

Advice: Book like you should with all restaurants at Port Douglas, unless of course dining pre-7pm. Sitting as close to the street gives you a great view, but then again all the outdoor covered dining area allows for fantastic views. And have the prawns.

In a nutshell: A fantastic restaurant that I believe was worth the money, given the quality of produce we encountered that night. It’s worth the fuss, and the booking ahead. Just be aware that it is a finer dining experience so some portions may need to be supplemented with sides. Finer dining can sometimes mean more boring, less adaptable clientele too. However, if you’re looking for some ‘great food,’ you’ll find it at this fine establishment.

One thought on “‘Bel’ Prawns”

#2448 The grass is greener downstairs