The reason we ended up at this restaurant on a Tuesday night in early April was pure chance. Sure, our intention was to eat out, we just didn’t know where we would do it.

And then, parking right out the front happened, and Hubbie had to ‘go,’ like immediately.

And so our night was born.

Dining at a Spanish tapas restaurant didn’t require much discussion or twisting of our arms though. Tapas, Barcelona and May, many many many years ago, was a firm memory in our minds, and had been the first, and one of our best, honeymoon destinations. We could rekindle the romance again, but this time, with baby girl in tow.

We were seated right near the middle bar, which was an expansive work of art in itself, that had copper pipes and barrels hanging significantly above our heads, which left us wondering ‘are they for real? Or a gimmick?’ Tiling against the wall behind the bar gave it that little village feel, and the suspended lightbulbs brought it in line with every other contemporary café doing the suspended lightbulb thing at the mo. I don’t knock it, despite its over-abundance wherever you go. In fact, I love it. People were sprinkled throughout the café, and with the front windows open and inviting, it gave it a real casual, all inclusive, spill-out-into-the-street Barcelona-style vibe, however it also left us cold on that cool Autumn night.

So to warm up, alcohol.

How could I possibly bypass a traditional recipe Sangria, after I had had so many night after night in one of our fave holidays destinations? And a recipe that had been passed down generation to generation, this I had to try. Hubbie, had a schooner of Fat Yak 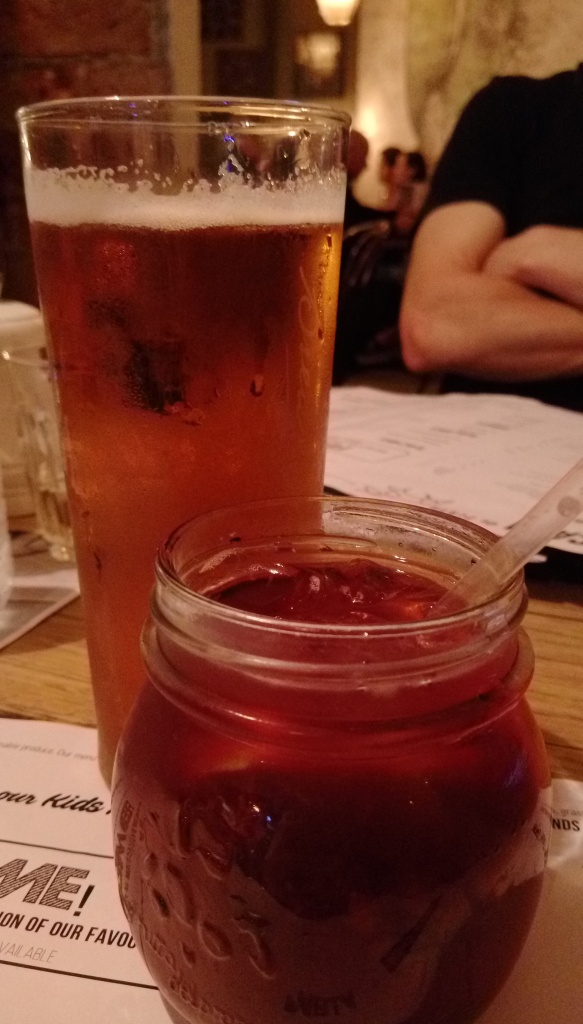 The sangria had that distinctive spice, and was fresh enough to disguise any strong alcoholic elements.

After perusing the menu for a long while, and discussing it with two waiters who were attending to us that night (one a male, the other one a woman who appeared more managerial-like) we decided we’d order food and try it as we went along, before deciding what was next. First up on the agenda: 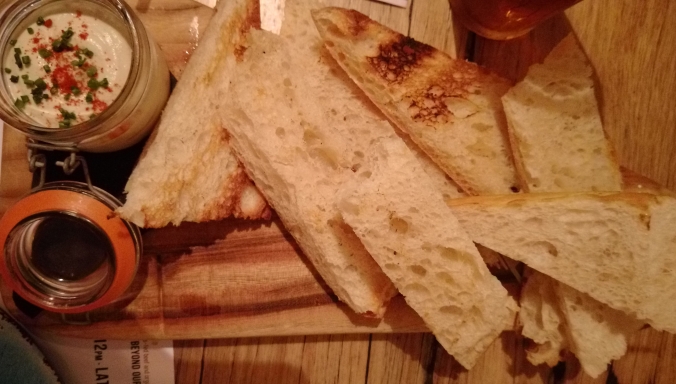 This was brought over, large pieces of toasted bread with a lovely and not-too-overwhelming eggplant dip. The smokiness was noted, but not too strong. The bread was a tad too toasted for me, you know, the cut-your-gums-on-bread type texture.

This soon came alongside baby girl’s Calamari and Chips

I didn’t really think she would eat any of the rings, and sure enough when she tried it they were a tad too stringy for her. But it was only another tapas meal for us to peck on, and kept us satiated until the next items arrived. 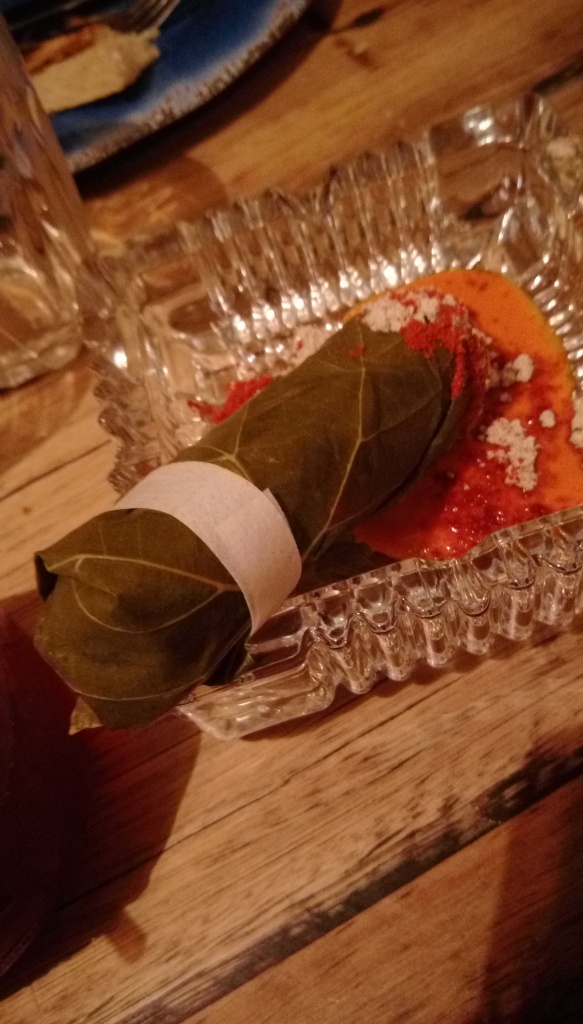 Though we shared the croquettas, Hubbie primarily had the Cubano cigar, albeit one bite which I indulged in. I don’t know the ingredients even though they are listed above, other than to say the inside was soft. Likewise with the eggplant dip, they both had a decent kick of smokiness once again, which I didn’t mind one bit. They were both moorish.

After all of this, we were surprisingly feeling 60% there – what with pick at this, pick at that, nibble here, and nibble there, and ‘hey I’m almost full!’ But we had one more thing that we had to try, and Hubbie being a massive coriander fan, and myself having become much predisposed to it lately, we had 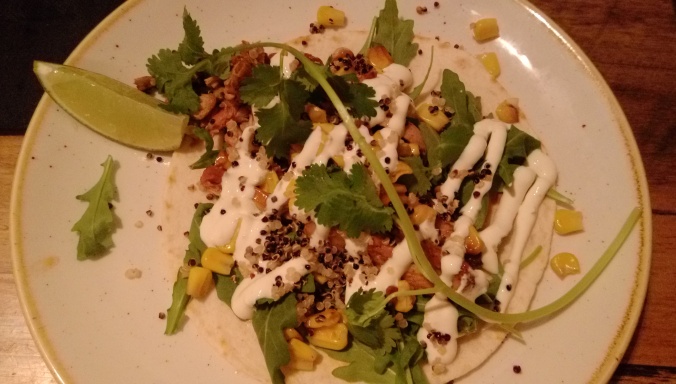 I liked the simple, fresh and quite pretty presentation, and it was just that, very enjoyable. It was a very light meal, and definitely meant to be had alongside other tapas, due to its small yet delicious portion. Herbs, cream and smokiness, alongside the textured grilled corn, all jumped out on the palate, and it was a meal I would definitely revisit on any other occasion too.

During the evening, baby girl only ventured to the toilets only about, say 3-4 times. Life with a toddler, you just need to take them seriously every time they say they have to go. But, it wasn’t so much an issue. Hubbie had told us to use the upstairs toilets, (remember his early visit?) accessible via winding stairs, since they were spacious and so much more nicer than the small one located around the corner and opposite the kitchen.

This bathroom was lush, with lovely white and new spaces, a huge selection of toilets (you won’t be left wanting here), luxury hand-wash products, and one of those airplane sounding hand dryers that scares the beejesus out of small babies, but is way too much fun for a 3 year-old toddler.

Anyway, in amongst all this, I had looked at the menu way in advance, and decided almost from the moment we left home (I know we didn’t even know where we were going, right?) that we were GOING TO HAVE FOR DESSERT: 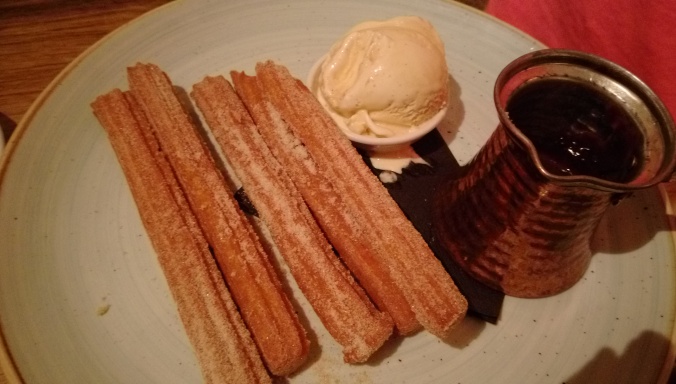 And shock horror, as baby girl and I returned back to the table after one such toilet visit, Hubbie had already started eating the churros. Without us.

Also you should know, we got some other things too…

Some short macchiatos, and a babycino 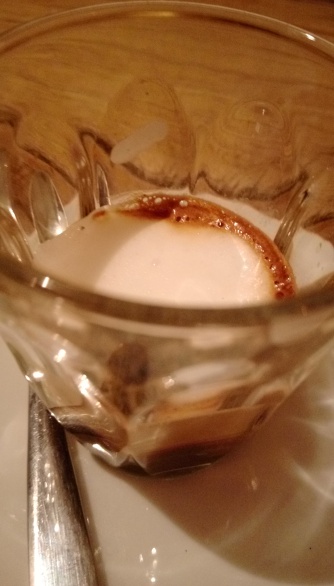 After I forgave Hubbie his slight in starting without us (but in a way I couldn’t really blame him – if that image of sweetness were staring at me, I would not be able to hold back either), baby girl and I dug in, however she was much more interested in her marshmallow and the milk and white chocolate buttons she had received.

The churros were crisp and as expected, and the short macchiato exceptionally strong. Baby girl also totally took over in the ice cream eating department, and I loved the shout-out to their Main street neighbour, using Vespa’s ice cream alongside the Spanish signature dessert. It’s so overwhelming, I can’t even handle the camaraderie.

Fuelled on milk and sugar, once baby girl started counting the 1000 tiles up against the bar, loudly, we knew it was time to go.

Food: 8.5/10. Exciting, fresh and different. A blend of international and modern.

Coffee: 7.5/10. Ahem, strong! I’m used to my frothy caps, and yet I didn’t have one that night because I wasn’t feeling it for the milk. Hard to judge, but it was smooth as well as tough.

Ambience: Very relaxed and cas, but in a trendy and upmarket way.

People: Couples and friends were dining out predominantly. Ages up to late 30s seemed to prevail.

Staff: Both our male waiter, and the managerial-like female tending to us that night were really lovely, but the female, more so. She was a natural and totally cool with baby girl, which always puts us at ease. They explained the tapas format really well and let us do as we please, menu-selection wise.

Price: $109.10 all up. Lots of little meals, but little meals still add up! That was for 3 alcoholic drinks, a kids meal, 5 small/sharing plates, as well as dessert and 3 coffees. Still, not too bad, and the quality was up there.

Advice: If the windows are open on a cool night, try to sit out the back of the restaurant.

When you go to the loo, venture upstairs!

Try the chicken taco (if you don’t like coriander scratch that).

Have the sangria (if you say you don’t like sangria why the hell are you even going to a tapas place???)

In a nutshell: Creativity, combustion of food, and fresh flavours make this an exciting and inventive place to be. We did the light, tapas-style meal this time, maybe the huge Paella to share might be next on the agenda. With the blend of Spanish influence with a modern contemporary taste, on the main street so close to Port Phillip Bay, this place is one Beach House that I will definitely say Hola to again.