Spring and sunshine. That was the mix and the fresh smell in the air as baby girl and I headed to Moonee Ponds on a Saturday at the onset of September.

A few weeks earlier we had organised for a little catch up – some of the ‘gang’ with our kiddies. As it was, one of the Mums left hers at home (lucky thing) while myself and another friend had our scallywags accompany us.

District North is an expansive, neutral-coloured, clean space. Seating is aplenty, but still, being in a busy eating precinct on a sunny Saturday morning, you can never be too sure. We had booked ahead, and got a booth location up against the wall.

Once the kids were both seated, they fortunately received this:

Thank God for colouring pencils. Well, it kept them busy for all of 46 seconds.

Anyway, we very quickly ordered, rushing the kids’ meals. It was a busy place, and definitely one that your child’s voice would get lost in the crowd – this is good. However kids being kids, we just didn’t want to test them, 11:30am and all.

Baby girl got the kids serving of pancakes with ice cream 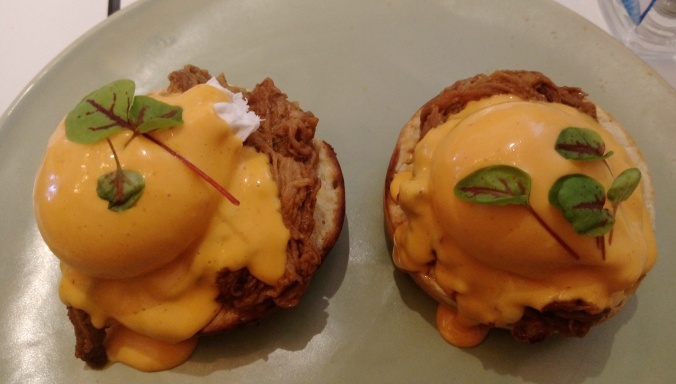 Now to be perfectly honest, I didn’t really understand what I was ordering. I kind of did, but somehow in amongst keeping baby girl in line and handing over pencil after pencil, and trying to keep her hands from taking the trucks out of her opponent’s (my friend’s son’s) hand, I kind of missed the ‘slow-cooked beef brisket’ part of the description, and thought Brisket was just, well, sauce or something.

Anyway, I now know what brisket is. And it was delicious. When I received it I was initially a bit “okaayyy.” I’m not huge on meaty dishes, only because of how fussy I am when I eat it. I don’t trust many to give me clean pieces of meat that have no icky bits in them. Even Hubbie was surprised to later hear that I’d had ‘brisket.’

And it was. The meat was super soft, there was a lot of it, but because of its shredded properties it all kind of melted in the mouth. I didn’t even find it all that overpowering, and it helped me to make the decision months later, to choose the brekkie brisket meal over at The Winey Cow in Mornington (post coming soon).

The eggs were fantastically poached, the bread was good, having gotten nice and soft under all that brisket and egg, and the hollandaise had definite kick… I would never have normally ordered a meat brekkie dish, but I was so glad I hadn’t read it properly, otherwise I never would have tried. Delish!

My friend, who had already been there with her son, had only gotten him one pancake on his own plate – and now I could see why. The pancakes were huge, and though baby girl had a very good crack at them, she didn’t finish them all. They were of a very good portion.

Now pumped up with much-needed fuel, we immediately ordered coffees:

Babycino and cappuccino for baby girl and I 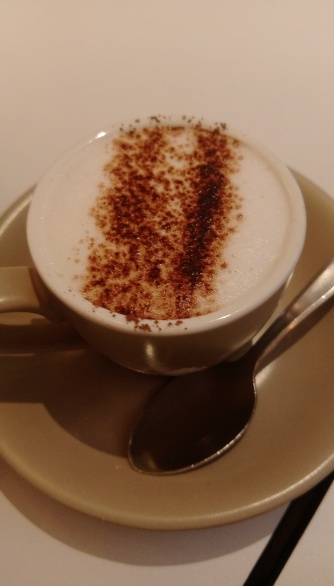 My cap was very smooth, something I half-expected having already experienced this well-run operation of eatery. And baby girl, well… when doesn’t she like her babycinos?

After a couple of toilet breaks, a short sitting outside on the small patio, and the kids finding the bucket of chalk to draw on the blackboard wall opposite the bathrooms, we went to pay, ogling the desserts up at the counter, but promising ourselves we would be back for those… another time.

Food: 9/10. Tasty, generous, and inventive. Why, bloody Mary hollandaise? Why not?!

Ambience: Busy and bustling, not necessarily loud, but there were many people about on that Saturday morning.

People: There were lots of friends and couples meeting for brunch, but then there was a decent dose of family types about as well, like the couple who came to sit beside us with their under 10s son and daughter, making me all jelly as their kids were just sitting there… reading the menu… like they didn’t have to do anything to entertain their kids. What?!

Staff: Friendly, but busy too so we didn’t really get a chance to get personal.

Price: I shouted one friend for a past favour, and the other gave me cash so I could pay with my card, so the individual total I was unclear on… but I believe it was about $80ish, for 3 brunch meals, 2 kids meals, and a few coffees? On par for that area.

Advice: Definitely book ahead if going in ‘prime’ time. Head over earlier too, just because you will need a bit of time to find parking on or off the busy Mt Alexander Road. If you have toddlers in tow, be mindful, the meals are generous. And don’t shy away from the Brisket!

In a nutshell: The food and coffee were fantastic. The venue itself, with its hipster pulled-back palette, is nothing inventive or inspiring to me, so in that regard it was lacking some character. I would definitely go back for the menu, but I’ve seen that kind of café and accompanying atmosphere around many times before. Nonetheless, if you are local to this area, you should check it out, that I recommend.

I would go there more often myself, if it were in my beach-side District…