We’d driven past the café/restaurant a few times, with the intention to go in and grab a coffee, but the opportunity truly presented itself one night during Hubbie’s leave period, when we wanted to go out to dinner but didn’t want to venture too far. We needed a local, and so urbanspoon-ing I went.

When I crossed the path of Third Place online, I realised we had to go, and their motto only cemented our decision, as it rings so true. ‘For everyone there’s Home, Work and a Third Place…’

Was this going to be ours? We needed a good local.

I called ahead and booked for dinner at 6pm, but upon arriving on that Thursday night, realised it probably wasn’t that necessary, as there was ample room and only one other group of people. It filled up a bit more during our dinner, however for a small group, on a weeknight, I think you’d get away with no phone-ahead booking. For us with a pram though, I don’t favour the thought of unpacking car and pram, only to be told ‘sorry’ at the door for not thinking ahead. So I’ll continue with my reservations.

Again, we found ourselves in a bluestone building, but this one was decorated by little blue fairy lights, probably so you could see it from the Main Road. Cute, and appropriate for Winter I guess. Inside the décor was interesting. You would expect to find perhaps a more historical style, suited to the age of the building, but it had a bit of a modern edge to it. This is in no way inappropriate, as I’ve seen plenty of television programs where untouched historical buildings have a completely renovated and modern style within its walls – only thing is it appeared far from finished. The lightbulbs hung from red wires over the tables, and the walls seemed unfinished, as well as the ceiling. There was a beautiful fireplace near us, but it was a modern one, with a pink wall around it. I don’t want to comment too much as I don’t know if they’re still in the process of doing up the venue, but I think it’s safe to say there needs to be a bit more sprucing up. Doing so would benefit the other pluses of the place.

The service was fantastic. Our waiter was very attentive, and brought the specials board over to us before we ordered, explaining all the dishes, and he almost sold me on the snapper if I hadn’t already seen prawns on the menu. I asked for a jug of hot water to warm up baby girl’s ‘pouch’ food, and it was a tiny bit slow on the deliverance – it’s the smallest of things but big to me, because when we go out to eat, it’s: feed baby girl, then I get fed. The longer she is delayed, the more chance my meal is sitting there, untouched and going cold as I finish feeding her. My meal did sit there for a while, as I’m now getting very accustomed to, but the meal was still warm, so I was a happy camper.

The food, the food! I was excited about the options: as the menu is not overly extensive (away from the pizzas that is) I was under the impression that what they do, they do well. The website states that the food is inspired by the Head Chef’s home town in Italy, with an emphasis on fresh home style cooking. We were pleasantly surprised when before our meals came one of the chefs (I assume) came to each of the tables and offered some complimentary pizza dough balls – an Italian word was pronounced but not understanding it I sure as hell can’t remember it, but he said there was some cheese and other herbs with it as well. It was warm, soft, very light and fluffy, and sooooo good. Bonus points on free food, as usual.

I had ordered the: 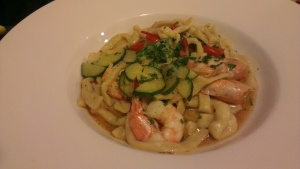 Hubbie ordered the special, which was: 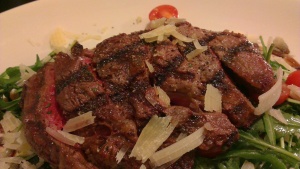 And we also ordered rosemary potatoes on the side.

I loved my pasta. It was so yummy. The prawns were almost creamy, the pasta itself was al dente and fresh, and the saute it was all in was so good, I continued to dip the rosemary potatoes – also really tasty – into the saute long after the pasta and prawns were gone.

I loved my pasta so much, I really wished there had been more. Unfortunately it wasn’t enough for me – there were only a few prawns, and if the meal had been only a little bigger, I would have been more satisfied. Delicious, but little light on the serve. I do realise the dish I ordered came from the ‘Primi Piatti’ section of the menu (meaning first dish, therefore assuming there would be a subsequent dish…) but like I said, a little more would have been ideal. And for $25, I guess I was expecting more. Still, super delish, and would definitely order it again, but with a side, again.

Hubbie said he would have enjoyed his scotch more, if it had been cooked to his liking. He requested medium for the meat, and it was definitely more on the rare side. He will still eat it if it’s not exactly as requested, but when the centre of the meat is bordering on raw, I can understand why he would feel unhappy about not getting what he asked for. It was a shame, because everything else was so good. He still ate most of it, and the salad too.

For dessert we decided WTF and shared a Pannacotta – baby girl was still good and I knew when Hubbie goes back to work our dinner nights would be over, so we had to make the most of it. 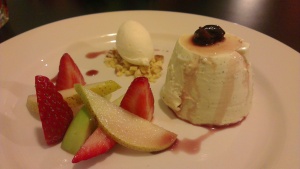 I’ll be honest, I haven’t tried heaps of panna cotta, but I assumed it was going to be more of a custard-y texture? Yes, it is custard, but this one was creamy, and I could see what appeared was traces of vanilla bean through it. Ice cream on the side, and some little fruit. It was easy to eat, and would be so even if on a really full stomach, as the dessert wasn’t sickly sweet. It left a lovely taste in my mouth, even though we were there going ‘is it meant to be like this?’ Hubbie wasn’t convinced, yet ate all of his portion. We scraped the plate clean, leaving our waiter jokingly asking us “What did you have?”

All up our meals and drinks were just under $90 – which is what we used to pay going into the inner-city suburbs for a meal on a Saturday night. Closer to a $100 when I used to get a glass of red. So a bit more on the pricey side, even the dessert, $14, is a decent price if you’re having the pannacotta just to yourself. So pricing is on the up-side, but the produce seems fresh and as I already said, the service was great.

Food: 8/10. Fresh, home cooked, all that good stuff… my meal was great, and I would love to try their other pastas too. Servings on the smaller size though.

Coffee: Yikes! We ordered none! Will need to do a Review part 2 on that one…

Ambience: Lovely and warm. Really digging the whole fireplace thing, hoping all restaurants start doing it. Once it’s more renovated, I think it will do heaps for the place.

People: We had a few couples, a group, and an older group. Pretty much locals I’d say, a mixed crowd.

Price: On the up-side. You’re paying for the produce, but that freaking pasta (it’s still on my tastebuds) is worth it… I just really wish they up the serves too.

Advice: Get a few plates. Have some nibblies, and then do the meal with sides thing, or as they suggest, do your antipasto, first plate, second plate, dessert… the food is great, you won’t regret it. But your wallet, might. These are the Northern Suburbs after all, not inner-city Melbourne.

In a nutshell: I would love to come back, try more pasta, some coffee… however Hubbie tends to get scarred when his meat is not cooked well. Not only is he a fusspot (he’d say rightly so when you’re forking out cash) but he’s a butcher, and he almost always gets meat when we order out. Poor restaurants everywhere. I’ve lost count of how many times our dinner conversations have turned to how rare/well done his meat WASN’T meant to be, and the number of times chefs have served up meat, the menu saying it’s one thing, Hubbie saying “no it isn’t…” yes, that actually happens.

He’s sorry to say it but he’s not keen to try it again. Because of the locality and food I will use my strongest powers of persuasion and get him to give it one more go… if only for that damn pasta.

So, not a Third Place. Not for us, not yet. But we are yet to try their coffee…

2 thoughts on “Pasta I can eat more than 3 times”

#2621 Breath and belly through it all