It had been a massive July day. Unusual for the month, being the middle of Winter and all. But I had been up early watching Croatia progress further in the World Cup. I hadn’t been able to sleep after all the excitement, but I wasn’t allowed to either.

It was a show-filled day.

Our first stop was seeing Lah Lah in Chelsea for baby girl to enjoy, and the last stop would also be for her… Disney on Ice in the city. In between?

Well, we were going to have some fun now, weren’t we???

Since we were headed into the city anyway, we had wanted to check out the MoMA New York exhibition at NGV that had made its way over to our shores. Also, we needed a spot to eat. Hubbie loved the bustling vibe of The Transport Hotel, and even though it was literally packed to the rafters, with footy fans and families moving throughout, we still lined up to try for a table.

Lucky we stuck with it. Or else Hubbie was just determined to get a table. The waitress told us she’d have a look, while another couple looked around the busy room on the ground floor and headed off. She saw us still waiting after she cleared some tables… sure enough someone was leaving. She ushered us over.

Baby girl and I were sitting with our backs facing against the window, it was kind of like a long window seat, whereas Hubbie was up on a high stool opposite us. He soon got a scotch, and he was IN HIS ELEMENT.

I also opted for something light and refreshing, and got an Apple Mojito – apple juice, lime, fresh mint, soda… while he chased his first one down with a beer.

It was a great vibe. There were surprisingly a lot of families around in that footy/pub vibing place, however a massive portion of the footy watchers were in the other room, standing with their beers and watching the action on the big screens. I watched the people outside exploring Melbourne city, the iconic Melbourne trams rolling on by, and it just seemed like a general wonderful stopping point to relax and take it all in, while remaining right in the centre of it all. It was relaxing, yet lively fun. Sunday out with friends. Family. No work in sight. And though it was looming the next day… you wouldn’t know it by looking at these people. 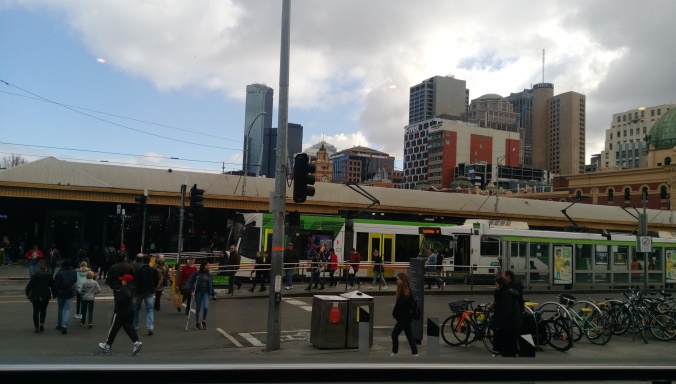 Knowing it was cold out too…. Ahh. Better.

With all of the cold however, I would have to get myself a warming meal, right? I mean, it was clearly the current trend (and I hadn’t learnt my lesson apparently), so I ordered:

A vegetable curry with pumpkin and lentils, coriander and flat bread

While baby girl got the mini parma, chips, salad off the kids menu

It was hilarious, because as you can see by the above two photos this was right in the middle of baby girl’s fuss-pot phase. We took the ham and cheese off her parma and it became a snacking point on Hubbie’s plate… vacuum waste-not people that we are.

Baby girl’s meal was great value. A decent piece of chicken and chips and salad! Kudos for green on a child’s plate, kudos. Though she didn’t eat it (we did, as before-mentioned, vacuums) just seeing it there to get her used to it for future meals… she enjoyed her chips and chicken as we feasted on our meals too.

My curry was good. It wasn’t anything I would go and order again. But for that day it did the job. It was warming, it was hearty. The flat bread was delicious and I recall baby girl hacking into that too (carb-girl). It was a lovely meal and also something Hubbie took particular pleasure dipping into every now and then.

As for the rest of Hubbie’s food… he was happy. It wasn’t anything overwhelmingly amazing, but for that city style of commercial menu, and with that many people there that day (and the kitchen most likely, overwhelmed) he was happy. He ate it. It was passable. It didn’t detract from the atmosphere of the day, and in that he was stoked with.

Oh, what a lunch. We felt grateful to have found a spot in such a busy, happening place, and now we were also FULL. We got up to head off on our way, ready for the next lot of events to take us through the city.

Food: 7/10. It was good fare, nothing to blow our minds but the menu options were interesting and wide-ranging.

Coffee: N/A… we were stuffed with food and had to balance our intake. Our coffee hit came later at NGV.

Ambience: Really happening and bustling but also in a warm way. Because we were seated in an area looking out towards St Kilda road, away from the footy TVs in the communal sports room, it felt quite cosy. It was a great place to be, bustled up with everyone else.

Staff: They were actually, really good considering how busy they were. Big credit to them, because often smiles are the first out the door when the volume of people increases. They actually, gave a shit. So, maybe the drinks took a while to arrive… but I mean, they were packed.

People: A bit of everyone! Family groups, older friends, parents with littlies, and of course, the discerning fan with pint of beer in hand and footy scarf wrapped around their neck… all were present that Sunday 😉

Price: $88.50 Actually decent. How did this happen when Hubbie had two alcoholic drinks? Oh that’s right, I didn’t.

Advice: Be prepared to wait for a table if you are arriving at a peak time, for example Sunday lunch.

In a nutshell: It is a great meeting point to catch up with friends in the city. A wonderful melting pot of people, doing whatever they like to do on a Sunday afternoon, whether that is watch footy or have a bite to eat or have a drink… you will find them all here. I would be more than happy to go back and see it all, and be amongst it all.

There’s no excuse in not getting there either. From the train nearby, close trams and buses, or even your own personal uber… Transport is available from all locations. 😉