Wednesday. Late May. A cold weeknight.

What on earth could see me, my sister, and nephew, strolling the streets of the city, all of us so far from home?

Why… much like Dorothy, we were “off to see the wizard, the wonderful wizard of Oz!”

I had purchased some tickets to see this most revered and classic of stories in musical form, and in turn gifted sis and nephew for their upcoming birthdays…

I figure, it is SO HARD to buy for people nowadays. Give them an experience they won’t forget.

They’ll forget that organic magic goat soap you bought them 2 birthdays ago, but a decade on and you will never forget THE WIZARD.

We had all arrived a tad earlier for our show, with full intentions of having a happy, hearty dinner. After walking by The Regent and taking the necessary cheesy photo with theatre billboard behind us, sis told us she had recently been to an Italian restaurant with some friends in Fed Square. As it was coming recommended, we began the short walk there. 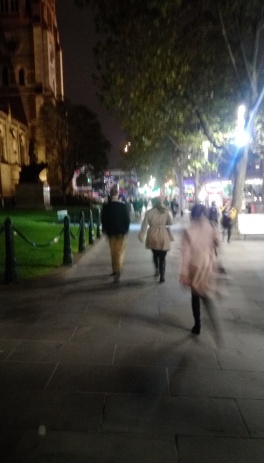 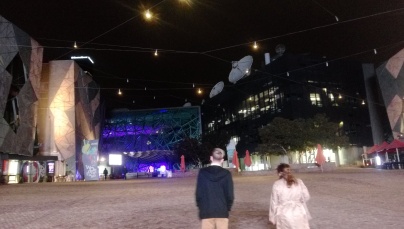 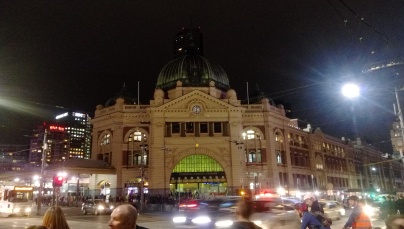 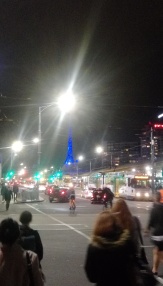 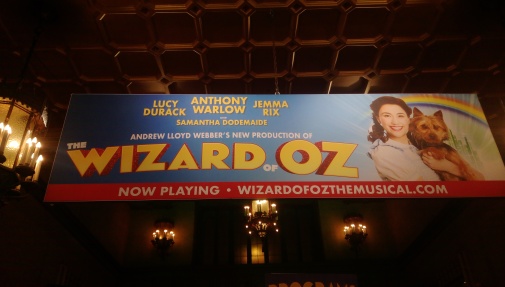 It was pretty deserted at 6pm. Still we wandered on through, observing the night lights, illuminated buildings and grand trees along the streets, ‘til we came to rest at Il Pom Italian. 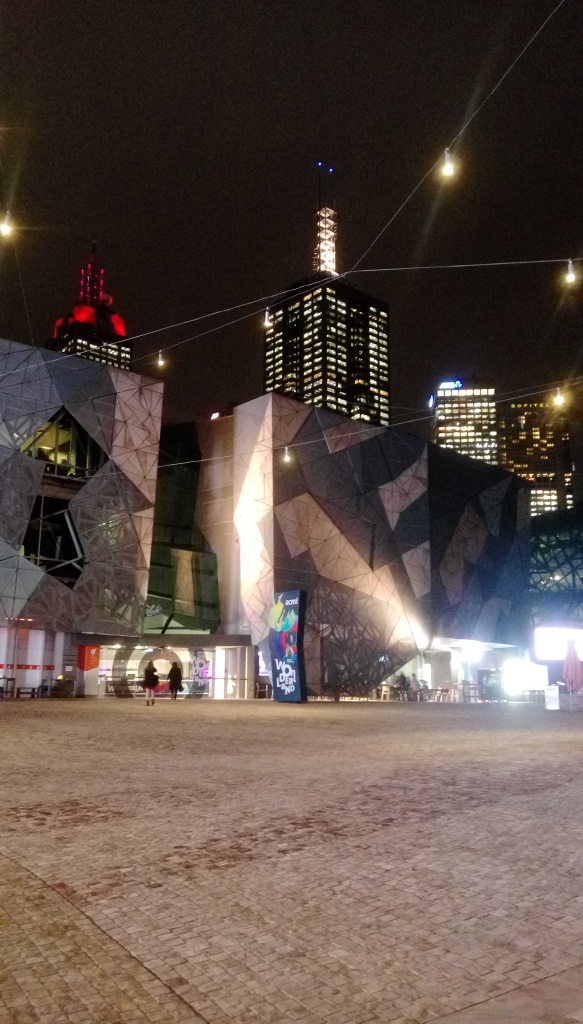 It was silent out, and we viewed a few people inside, also dinner early birds. We were tended to almost immediately by a waitress who we later found out was the manager. At first impression she seemed a bit forward, especially when laughing at our indecision on where to sit. Inside, outside, under heaters, under umbrellas… there was so much to consider on that almost Winter’s night, as it was still, the city looked beautiful, and we wanted to observe the scenery before us, but still be WARM. 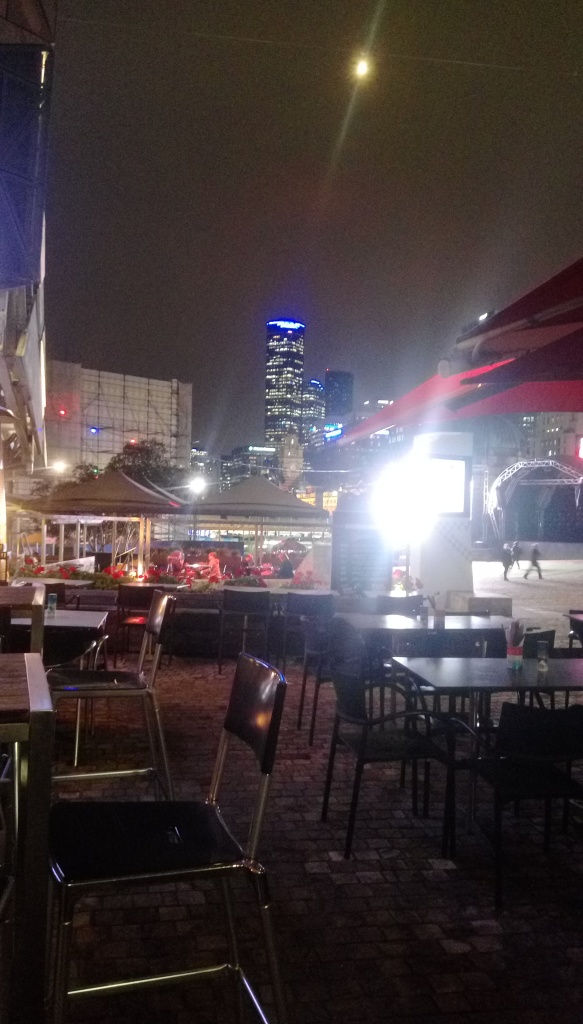 But we grew to love her. She was openly envious of our going to The Wizard of Oz, and we laughed constantly every time she was near. She was honest about alcohol given to minors, (when my sister politely asked the rules when kids are with parents, she said 15 for my nephew was too young in her book) and we all tsk tsk tsked at parents who decide to give their kids espresso martinis. That’ll knock ME out, let alone your kid!

We got some meals, again mentioning we had to be out of there by 7:30 (to exaggerated rolled eyes!) and I opted for something so simple, basic and fresh but sometimes, the simplest things really ARE the best. 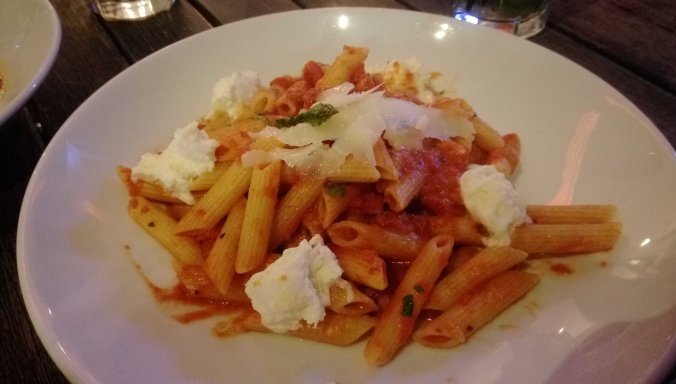 And this was, THE BEST.

Such beautiful pasta. Cooked to perfection. Simple Napoli sauce. That buffalo cheese…. DRRRROOOOOLLLLL. I would go back to that restaurant only for that pasta.

Note to self (and everyone): when in Italy, do what Italians do.

When at an Italian restaurant, eat what Italians eat.

Everything about the pasta was perfect and made me so happy. We chatted and talked and made memories. Spending some quality time with my sister and nephew, bonding and sharing stories, was special, something you don’t get to do often in the busy-ness of every day, but more so, something we don’t get to do during a school/work weeknight! It felt like we were somehow cheating, but really, we were winning at life that night.

Our conversational juices really started to flow though, with… the MOJITO! 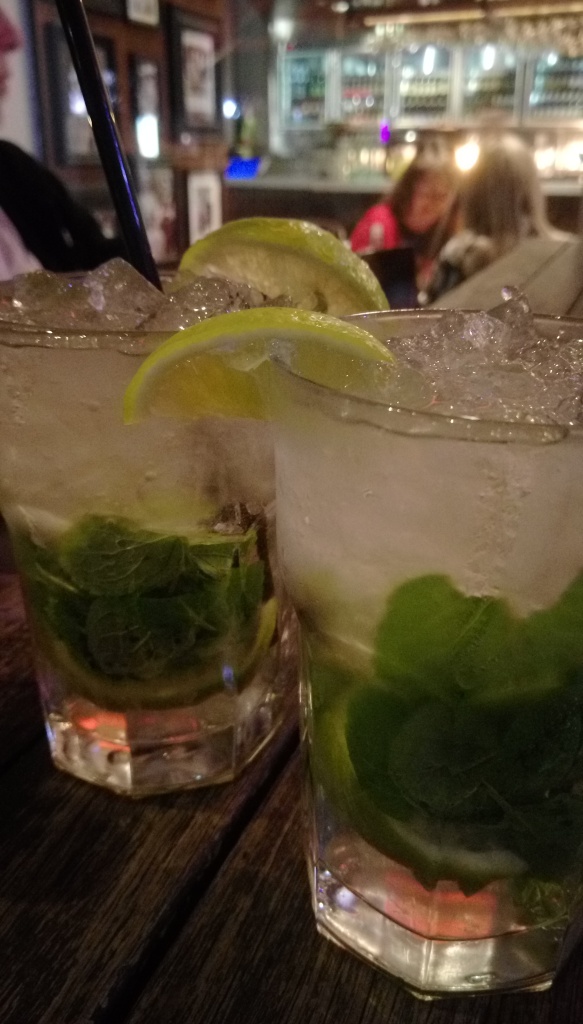 It was also, the BEST EVER.

I don’t know what drugs or sweetened syrup she put in there, as there was a distinct syrupy taste, but it was insane. It made me and sis, who also had one, feel like we weren’t drinking alcohol, as it didn’t taste at all strong, but then….

Right there in the head.

That’s it, I’m out, thank you very much…

I absolutely loved it.

We complimented the manager on the amazing cocktail, and I openly said I was a little “Wooo!” in the head. She showed her care but was still amicable, like that cool parent that lets you drink alcohol but still sets boundaries… She hadn’t let my nephew have any, but me, this grown-up adult was having one, and being told off in the process…

After some more chatting and memory-making, sis paid (her treat for us that night) and we went off, for our date with the ruby red shoes.

Ambience: So quiet that Wednesday weeknight. There were diners inside, but we were the only ones to brave the cold. The silence was perfectly to our liking. Warm heaters nearby, twinkling lights of the city before us… it set the mood to talk about magic.

Staff: Our waitress/manager was fantastic. A ball of fun and highly entertaining to talk to. The right head of house exists there.

Price: About $120-$130 for what my sister forked out – that’s 3 mains, 2 alcoholic drinks, a lemonade and a coffee. A bit high for sure, but we aren’t in Kansas anymore Toto, and the pasta outside of our ‘burbs happens to be stuff you try to get lost for. Kudos.

Advice: If you haven’t worked out what to eat, please for the love of God, eat the pasta and have a mojito! You are most welcome, in advance. 🙂

In a nutshell: I loved this place, and more so because it was the prerequisite of the magic that occurred after…

I would definitely go back, and how much easier if I could just tap my ruby shoes 3 times… 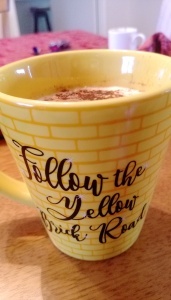 Why don’t you read with me?

Smikg's favorite books »
Share book reviews and ratings with Smikg, and even join a book club on Goodreads.